There’s this thing that scoliosis patients say when the pain becomes too much for them. They call themselves “bent not broken”. It means that no matter how much pain they’re in, the pain doesn’t win. And no matter how much they’re suffering, they can be loved and can love back, in despite what feels like the endless cynical and brutal nature of the world. It means that no matter hard it gets, you can breathe through the pain and lean on the people you love until it gets easier, and you can get through it.

That’s the type of feeling you get with Jessica Park’s Left Drowning. This novel is devoted to everyone out there who’s suffered (or suffering) and reminds them that they’re not lesser for having been hurt, but rather they’re stronger for having survived.

What does it take to rise from life’s depths, swim against the current, and breathe?

Weighted down by the loss of her parents, Blythe McGuire struggles to keep her head above water as she trudges through her last year at Matthews College. Then a chance meeting sends Blythe crashing into something she doesn’t expect—an undeniable attraction to a dark-haired senior named Chris Shepherd, whose past may be even more complicated than her own.

As their relationship deepens, Chris pulls Blythe out of the stupor she’s been in since the night a fire took half her family. She begins to heal, and even, haltingly, to love this guy who helps her find new paths to pleasure and self-discovery. But as Blythe moves into calmer waters, she realizes Chris is the one still strangled by his family’s traumatic history. As dark currents threaten to pull him under, Blythe may be the only person who can keep him from drowning. 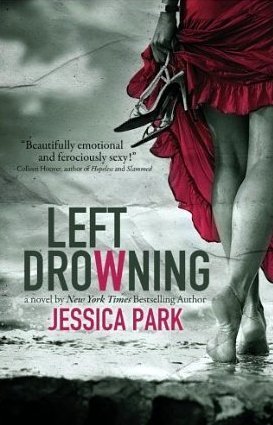 Left Drowning sat on my to-read shelf for a long time. It’s quite a dark book, and deals with a lot of dark issues and major themes, so I was worried that it would be a bit depressing to read. I was wrong though, because Park does focus so much on the hard things in life as she does about overcoming them.

However, despite Left Drowning being a new adult book, it reads a lot like a young adult book. I read the story in one sitting and found it incredibly easy to follow without using much concentration. It wasn’t particularly stimulating, but it was enjoyable in the way that you could enjoy watching a favourite movie or TV show: you could follow what was going on without paying all of your attention on it.

That said, the book had a very powerful message: you have to deal with the pain and tough parts of life head on, learn how to process them and breathe through them. Otherwise, you’ll always be stuck in the past and looking backwards. And you have to let the people you love and who love you help you do that without pushing them away.

“Your world fell apart.”
I nod.
He puts his hand on my cheek. “You were left drowning”
I nod again.
“And you’re struggling to breathe”
I am. It’s a constant struggle to stay near the surface. I have just enough air to stop me from going totally under, but not enough to thrive.
“So do it. Breathe. Just Breathe.”
― Jessica Park, Left Drowning

In order to be able to move forward in life, we have to be able to let go of the past. We have to look to the future – we have to remember we have a future. Something is going to happen next because we are alive. And that gives us plenty of time and opportunities to heal if we let it.

“You have the here and now. You have a future. Deal with the past so you can stop looking back. It’s just pain.”
― Jessica Park, Left Drowning

If someone loves you – really loves you and cares about you – they will want to help you. They will want you to lean on them and go them for support. They won’t run or bail on you. And if they do then they weren’t worth having in your life anyway and you can and will find somebody else.

Having a problem, or an issue, isn’t a good reason to leave or push someone out of your life. We’re not meant to struggle alone. Having someone there through the bad stuff can broaden your perspective and show you there’s still so much good to be happy about. They can help you heal. They can help you feel.

Left Drowning pays homage to the terrible things that can happen in life. But it also reminds us that we can get through the worst with the right support and people in our lives who care.