There are numerous books and novels out there that focus on mental health disorders and what can happen when they’re not taken seriously. They tackle the stigma around mental illnesses such as suicide, depression and anxiety. Many of these novels start when the characters have been diagnosed and consider taking extreme measures – and some of them do, and some of them don’t. In the end, however, there is always a message of overcoming which illness is affecting them. And, always, there is hope. Hope that you can get better, that you can live through it, if not necessarily beat it. That you will be ok.

Kathleen Glasgow’s Girl in Pieces is different. It starts off with a girl who has already taken drastic measures and finds herself at the edge. It starts off with Charlotte Davis in a rehab facility, where she doesn’t where to be, where she doesn’t want to exist. This powerful and raw novel starts off from rock bottom and shows the struggle of what happens when you get there. It’s difficult, it’s powerful and it’s real. Girl in Pieces is one you won’t forget – for all the right reasons.

Charlotte Davis is in pieces. At seventeen she’s already lost more than most people lose in a lifetime. But she’s learned how to forget. The broken glass washes away the sorrow until there is nothing but calm. You don’t have to think about your father and the river. Your best friend, who is gone forever. Or your mother, who has nothing left to give you.

Every new scar hardens Charlie’s heart just a little more, yet it still hurts so much. It hurts enough to not care anymore, which is sometimes what has to happen before you can find your way back from the edge. 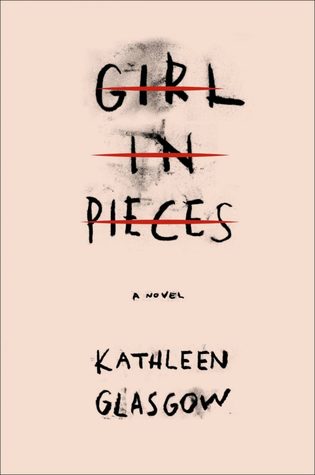 As I’ve said, Girl in Pieces is different. Rather than looking at the depression side of mental health, Glasgow tackles the stigma of self-harm. And rather than giving the message of coming out stronger and whole and healed, like most young adult stories about mental illness, Glasgow gives a much more real lesson that, I believe, will comfort more people than being inadvertently told that they’ll be ok in the end.

There are so many incredible things to talk about in this book, but I’ll start off with the story’s central message: self-harm is not attention seeking, nor is it a cry for help; it is a mechanism for coping with overwhelming emotional torment.

Most people look at self-harm and think “Imagine causing harm to yourself, what on Earth would possess you?” or “What a shame, so starved for attention that they’ll do anything to get it.” Most people don’t know what to say so they’ll just ignore it completely.

I’m not advocating for self-harm or saying it’s the right thing – I don’t believe that. But what I am saying is that I understand it like Glasgow does, and more people could benefit from others who at least try to consider it in this way.

It’s my experience that people are a lot more sympathetic if they can see you hurting, see you bleeding. Can you imagine how these people, who are mentally suffering so much, feel? Wishing for the millionth time that they had measles or smallpox or some other easily understood disease just to make it easier for them and other people to understand what they’re going through?

I once saw a documentary on migraines, and one of the people interviewed used to fall on his knees and bang his head against the floor, over and over again during attacks. He told people he did this because this diverted the pain from deep inside, where he couldn’t reach it, to a pain outside that he had control over.

Because the truth is, no matter how much we try to convince ourselves, we can’t control pain that is deep inside. You can close your eyes to things you don’t want to see and you can put a plaster over cuts that are bleeding. But you can’t get away from yourself. You can’t decide not to see yourself anymore. You can’t decide to turn off the noise in your head.

Imagine living with that kind of pain every day.

I know it’s hard for people, but we shouldn’t shake our heads in disgust at those who find life to be so unbearable painful. We should try and understand their pain so we can comfort them instead of judging them.

There are so many other amazing messages in Girl in Pieces, but one that I strongly believe in is this: just because you think you are damaged, it does not mean that you’re broken, it just takes a little bit of time and self-love to find some strength.

When we go through trauma, or end up in a position like Charlotte, we try and work out how it happened, but most of the time we can’t boil it down to one single thing. Glasgow reminds us that what hurts us is cumulative. It happens over time. We absorb blow after blow, shock after shock, painful hit after hit.

And still, even then, it doesn’t mean that we fix everything. Some things can’t be ‘fixed’. You can’t heal every wound, but that’s ok. Through Charlotte, Glasgow shows us that we have to believe that this is ok, because in order to survive we have to acknowledge and believe that even if something seems like it cannot be fixed it doesn’t mean it’s broken.

“Everyone has that moment I think, the moment when something so momentous happens that it rips your very being into small pieces. And then you have to stop. For a long time, you gather your pieces. And it takes such a very long time, not to fit them back together, but to assemble them in a new way, not necessarily a better way. More, a way you can live with until you know for certain that this piece should go there, and that one there.”
― Kathleen Glasgow, Girl in Pieces

And now, for the last message – the one with hope. This message isn’t your typical young adult one about having hope that you can get better. It’s much more real and powerful than that. Her message is this: It is ok to be yourself, no matter what you have been through or done no one is going to care about the past. If you just be yourself, that’s what people are going to love. And if they don’t, that’s on them. They clearly aren’t worth letting in anyway. Because that’s their problem, that’s their loss and they are missing out on something wonderful.