I’m going to start by saying that I am a massive fan of Katie McGarry — I have read all of her novels from her Pushing the Limits series to her Thunder Road series to her few stand alone novels. And her latest novel, Say You’ll Remember Me, might just be her best one yet.

Say You’ll Remember Me is just what I’ve come to expect from McGarry. It’s the type of contemporary that makes you laugh, makes you cry and at the same time leaves you truly thinking about all the complexities of the themes. McGarry’s stories are full of passion, adventure and even a little danger, and what more could you want from a young adult novel?

When Drix was convicted of a crime–one he didn’t commit–he thought his life was over. But opportunity came with the new Second Chance Program, the governor’s newest pet project to get delinquents off the streets, rehabilitated and back into society. Drix knows this is his chance to get his life back on track, even if it means being paraded in front of reporters for a while.

Elle knows she lives a life of privilege. As the governor’s daughter, she can open doors with her name alone. But the expectations and pressure to be someone she isn’t may be too much to handle. She wants to follow her own path, whatever that means.

When Drix and Elle meet, their connection is immediate, but so are their problems. Drix is not the type of boy Elle’s parents have in mind for her, and Elle is not the kind of girl who can understand Drix’s messy life.

But sometimes love can breach all barriers.

Fighting against a society that can’t imagine them together, Drix and Elle must push themselves–Drix to confront the truth of the robbery, and Elle to assert her independence–and each other to finally get what they deserve. 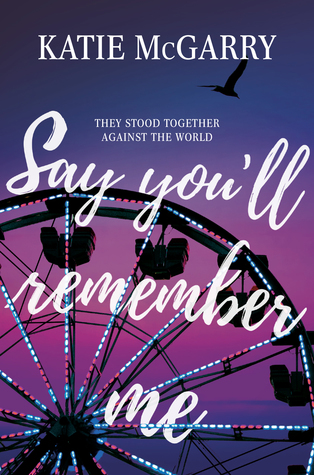 As much as it was what I expected from McGarry, I did get the sense that Say You’ll Remember Me was slightly different. The things I love in a McGarry story were still there — the adorable romance, the boy who makes the girl braver, the girl who makes the bad boy good, the character arc that brings them out their shell, the strong and riveting plot that keeps you on edge.

However, this story was slightly different. For a start there is a political element to this book that isn’t there in many others. Elle’s dad might be the most interesting character in Say You’ll Remember Me. Elle loves him deeply and she believes in him. She knows his heart and his desire to truly help people through his political position. And then politics itself gets in the way. In a lot of ways, this story is an exploration of how even good people struggle to stay that way once they’re in a position of power. I thought that this was done thoughtfully, realistically, and in a way that helped you see all sides.

But thing that I enjoyed most from the novel was it’s message. Most of the time McGarry’s stories have a message about daring to love, or fighting for what you believe in, or knowing that love is worth fighting for. The message in Say You’ll Remember Me was slightly different.

This is what I took from McGarry’s novel:

In relationships there are bad times and good times, and it’s important to know that not everything is going to be happy and great 100% of the time. You will fight, you will disagree, you will break down and go through some personal lows and so will the person you are with. No one is going to happy all of the time. But that is where having someone you love will come in, because the best relationships are those where you’re both going to have bad days and the other will carry the will carry the one down on their luck until they’re strong enough to stand again.

During one chapter just after halfway through the novel Drix tells the story of a time when he went hiking in the forest and had to scale a cliff but because he was tired and weary, his mind settled into a dark place and he felt like he couldn’t do it. He wanted to give up; he didn’t feel strong enough. He wanted to give up and be done, but his friend Marcus refused to give up on him.

Marcus refused to eat because Drix wouldn’t get food until he scaled the cliff. Then he offered to scale the cliff with Drix even though he has already done it and made him see that having someone with him, who he could lean on and who supported him while he was struggling, meant he could do anything.

“You’ve already done it.”
“Yeah.” A look straight into my eyes. “I did, so follow me, and I’ll show you the easiest way up the cliff. Because, sometimes, that’s what we need. Someone to show us how to get there.”
— Katie McGarry, Say You’ll Remember Me

Sometimes having someone hold our hand to give us strength is sometimes all we need to believe we are strong.