With Me Before You, Jojo Moyes crafted a millennial love story – a heart-breaking tale of two people from very different walks of life who find, first, vague irritation, and later, love, as they discover purpose in each other and their own visions of how to build a meaningful life.

The hero, Will Traynor, is a quadriplegic intent on ending his own life after becoming paralyzed and the heroine, Louisa Clark, is his cheery, well-meaning caretaker. Two novels later, Louisa is back in Still Me, embarking on a new life across the pond as an assistant to a wealthy Fifth Avenue wife in New York City.

Louisa Clark arrives in New York ready to start a new life, confident that she can embrace this new adventure and keep her relationship with Ambulance Sam alive across several thousand miles. She is thrown into the world of the superrich Gopniks: Leonard and his much younger second wife, Agnes, and a never-ending array of household staff and hangers-on. Lou is determined to get the most out of the experience and throws herself into her job and New York life within this privileged world.

Before she knows what’s happening, Lou is mixing in New York high society, where she meets Joshua Ryan, a man who brings with him a whisper of her past. In Still Me, as Lou tries to keep the two sides of her world together, she finds herself carrying secrets–not all her own–that cause a catastrophic change in her circumstances. And when matters come to a head, she has to ask herself Who is Louisa Clark? And how do you reconcile a heart that lives in two places? 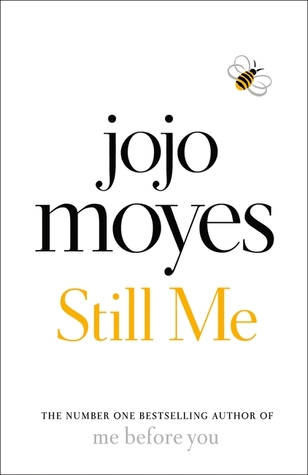 Let me start by saying that I absolutely loved Me Before You, so I was delighted to read the first chapter of Still Me. Reading about Lou is like meeting an old friend. I was hooked from the first sentence and can’t wait to read the rest of the book. It was lovely to find out that she is in New York starting a new job and still the same adorable character.

However, when my friend first told me that Moyes released a third book, I was worried. I didn’t think there needed to be a trilogy. I thought Me Before You was fantastic, it didn’t get much better than that – which is why the book which followed, After You, despite how good it was, never really lived up to tit’s predecessor.

In Still Me, Louisa finally takes Will’s advice from Me Before You: “You only get one life. It’s actually your duty to live it as fully as possible.” She does take chances and tries to be her own person, which is what I really wanted to see.

The first two books have very powerful messages, and I wasn’t disappointed with this one, either. I felt as though Moyes was trying to remind her readers to always be who you are, regardless of what anyone else thinks. And if they don’t like it then they’re not worth having in your life. Or, as Will would put it, “Wear those stripey legs with pride.”

Near the end of the book, the character of Mrs De Witt (who at first annoyed me but then I came to love), tells Lou:

“If someone likes you, they will stay with you; if they don’t like you enough to stay with you, they aren’t worth being with anyway. You know that.”
— Jojo Moyes, Still Me

It becomes apparent to Lou soon after that she needed to find and be her true self. At the end of the novel she says:

“I had a choice. I was Louisa Clark from New York or Louisa Clark from Stortfold. Or there might be a whole other Louisa I hadn’t yet met. The key was making sure that anyone you allowed to walk beside you didn’t get to decide which you were, and pin you down like a butterfly in a case. The key was to know that you could always somehow find a way to reinvent yourself again.”
— Jojo Moyes, Still Me

Reading this, you can almost hear Will shouting “Yes!!” and nodding his head in approval. Which is why even though Will’s character isn’t actually in the third novel, you still feel him on every page.

One of my favourite chapters for me in the book was when Josh, a newly found love, dumped her over her bumble bee stripey tights. He was trying to change her to be someone who she wasn’t, to be more like him. Will would never have approved. It’s my favourite because after some thought she never let him do that to her. She wore her stripey legs with pride.

Lou’s clothing is carefully chosen in general to display her quirky, cheerful personality, as well as keep her safe from unwanted male attention. As any Me Before you fan will know, when Lou was three, she had a pair of bumblebee tights that she loved more than any other item of clothing, yet she regrettably outgrew them and cannot find another pair like them.

These tights become a symbol of Lou choosing to do things for herself. Though no one else liked the tights, Lou wore them because they made her happy. Similarly, Lou cannot continue to make choices about her future based on what other people think is best for her. Will gives her a new pair of bumblebee tights for her 27th birthday, showing that he understands that Lou has to make decisions herself and herself alone.

No matter what anyone else think of Lou’s choices, Will gives Lou license to make the choices that she truly wants. In Will’s last letter, he tells Lou to wear her stripy legs with pride, symbolically continuing to be true to herself in her future life and career.

Finally, she did that in Still Me. So, in the end, it was the perfect closure I needed for Lou and her story. Turns out I had nothing to worry about.

See my previous post on Me Before You here.