Ray Bradbury is one of the best writers of our time, our parents’ time, and our grandparents’ time. His works, which included Fahrenheit 451 and The Martian Chronicles, influenced generations of readers who became fans who became epic storytellers themselves. Epic storytellers — like Steven Spielberg, the director of films like Close Encounters of the Third Kind and E.T.. Bradbury was, and still is, a muse for writers of all ages. He lives on through his legion of fans. In the world of science fiction and fantasy and imagination he is immortal. One of his works that is a personal favourite of mine is his collection of short stories, The Illustrated Man.

The Illustrated Man has remained in print since being published in 1951 and is a fair testimony to the universal appeal of Bradbury’s work. Only his second collection it is a marvellous, if mostly dark, quilt of science fiction, fantasy, and horror.

In an ingenious framework to open and close the book, Bradbury presents himself as a nameless narrator who meets the Illustrated Man–a wanderer whose entire body is a living canvas of exotic tattoos. What’s even more remarkable, and increasingly disturbing, is that the illustrations are themselves magically alive, and each proceeds to unfold its own story, such as “The Veldt,” wherein rowdy children take a game of virtual reality way over the edge. Or “Kaleidoscope,” a heartbreaking portrait of stranded astronauts about to reenter our atmosphere–without the benefit of a spaceship. Or “Zero Hour,” in which invading aliens have discovered a most logical ally–our own children. Even though most were written in the 1940s and 1950s, these 18 classic stories will be just as chillingly effective 50 years from now. 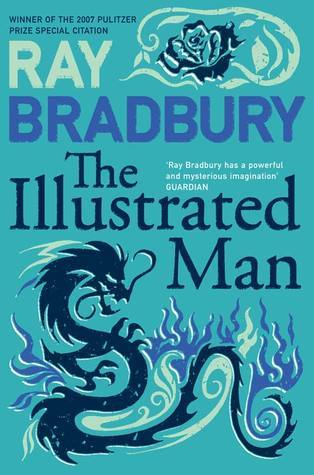 Each story tells a separate tale involving different characters; however, they are all connected to character called the Illustrated Man. While the plots of the stories deal with typical science fiction themes like space travel and technology, the stories and the characters involved carry a deeper message about human nature and relationships looking at technology vs humanity.

Like in the first short story in the book, “The Veld”,  parents in a futuristic society worry about their children’s mental health when their new virtual reality nursery, which can produce any environment the children imagine, continually projects an African veldt populated by lions feasting on carcasses. The family uses technology as a replacement for human, family connections, and the children become murderous monsters because of it.

Similarly in “Marionettes, Inc.”, an unhappily married man buys a realistic robot to act as a surrogate so that he doesn’t have to deal with his wife, and the man’s friend also goes to buy one for himself. The characters use technology as a substitute for facing the human problems of their marriage, and in doing so, they ruin themselves.

And also, “Zero Hour” has a similar message. In this story, children across the country are deeply involved in an exciting game they call ‘Invasion’. Their parents think of it as harmless fun until the invasion actually occurs. Much like “The Veldt”, the main idea of this story is the danger of the creative imagination. Related to this is the particular danger posed by children. Here it’s not neglect that’s at fault, but the common adult refusal to take the behaviour of children seriously.

In the second short story in the book, “Kaleidoscope”, men hurtle into space when their rocket blows up. Hollis realises that his life has been full of dreams rather than memories. The narrator bitterly reflects on his life and feels he has accomplished nothing worthwhile. His final thought is a wish that his life would at least be worth something to someone else. He dedicated his whole life to the rocket and technology and missed out on an actual human life.  As he falls through Earth’s atmosphere and is incinerated, he appears as a shooting star to a child in Illinois.

In “The Man”, space explorers find a planet where the population is in a state of bliss. Upon investigation, they discover that an enigmatic visitor came to them, whom the spacemen come to believe is Jesus. Religion or spirituality represents humanity, which conflicts with the captain’s desire to find out about the physical world. He is so concerned with finding the physical evidence of Christ that he misses out on spirituality.

Similarly in “No Particular Night or Morning”, two friends in a spaceship, Clemens and Hitchcock, discuss the emptiness and cold of space. Hitchcock embraces solipsism, and repeatedly insists that nothing in space is real and there is no night or morning. He refuses to believe anything about reality without sufficient evidence and soon becomes skeptical of everything he cannot directly experience. He says that he doesn’t believe in stars because they are too far away. Faith represents humanity, which conflicts with Hitchcock’s desire to only believe in things he can physically hold. He is so concerned with finding the physical evidence of thing that he misses out on believing in what he cannot see.

In “The Other Foot”, Mars has been colonised solely by black people. When they learn that a rocket is coming from Earth with white travellers, they institute a Jim Crow system of racial segregation in retaliation for how the whites once treated them. When the rocket lands, the travellers tell them that the entire Earth has been destroyed, including all of the horrific mementos of racial discrimination. Atom bombs destroyed everything. When faced with difficulties they used new technologies to blow each other up, when in reality they could have used each other and supported one another to get themselves through it and their hardships.

Halfway through the book in the eighth story, “Usher II”, books and stories have long been accepted as playing big roles as being saviours of humanity, and in this story people on earth have burned novels and books. Literary expert has retreated to Mars to escape the book-burning dictates of the Moral Climate Monitors. On Mars he has built his image of the perfect haunted mansion, replicating the building from Edgar Allan Poe‘s short story The Fall of the House of Usher, complete with mechanical creatures. When the Moral Climate Monitors come to visit, each of them is killed in a manner reminiscent of a different Poe story, culminating in the immurement of the lead inspector. Having removed this aspect of humanity but left them with a massive amount of different technologies turns the main character murderous.

Similarly in “The City”, the city was waiting for the arrival of humans, designed by a long dead civilisation to take revenge upon humanity; the civilisation was destroyed by human biological weapons before recorded history. Once the city captures and kills the human astronauts, the humans’ corpses are used as automatons to take a final act of revenge: a biological attack on the Earth. The whole city becomes a murderous monster because it’s own humanity was taken from it before it had a chance to take hold and make a difference.

In “The Highway”, a husband and wife living by a highway in rural Mexico live their simple, regimented lives while the highway fills with refugees of a nuclear war. They give assistance to some young travellers, who tell them that the nuclear war means the end of the world. After the travellers leave, the husband wonders what they meant by “the world”. Is the fear and destruction of atomic war. Bradbury gives an almost surreal glimpse into this fear of atomic war as he briefly describes the fleeing occupants of the cars as having something unidentifiable in their faces.

In “The Fox and the Forest”, a couple living in a war-ravaged future society on the brink of collapse uses time travel to escape to 1938 Mexico. They and others before them have used the technology to enjoy life before chemical, nuclear, and biological warfare ruined everything. Unfortunately, the authorities have also traveled back in time to return the exiles to the future. The main idea is the struggle for freedom in a fascist society. The time travel adds an exotic science fiction element to the story, but the flight from oppressive governments is a reality of modern life. Time is symbolic of the freedom that the Travises wish to live: for them, the time from which they originated is static, fixed by its very oppressiveness. 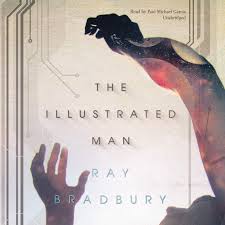 Where other stories focus more on technology, “The Long Rain” looks more at humanity. A group of astronauts are stranded on Venus, where it rains continually and heavily. The travellers make their way across the Venusian landscape to find a ‘sun dome’. The characters, one by one, are driven to madness and suicide by the unrelenting rhythm of the rain. At the end of the story, only one sane astronaut remains to find a functional sun dome. In this story the characters, bar one, give up hope. But if they had just held on that little bit longer they would have found exactly what they were looking for.

In “The Rocket”, a poor junkyard owner has saved $3,000 to fulfil his dream to send one member of his family into outer space. When the family cannot choose who will go, fearing those left behind will resent the one chosen, the main character is torn between scientific exploration of the wonders of the physical universe and human connection with his wife and child. This conflict colours his entire existence. In the end the merges both humanity and technology and build a replica rocket containing a virtual reality theatre that simulates a voyage through space. Shows that the two can be used together to make the best of a situation.

However, “The Visitor” is the complete opposite to this. In this story, Mars is used as isolation for people with deadly illnesses. One day, the planet is visited by a young man who has the ability to perform telepathy. The exiles on the planet are thrilled with his ability and a violent fight breaks out over who will get to spend the most time with their visitor and enjoy the illusionary paradises he can transmit. In the struggle, the young man is killed and the escape he provided is lost forever. In this story, the young boys telepathic powers come to represent virtual reality systems, where it shows that too much of that power and living in a headspace where that feels like reality instead of actual reality can cause damage.

Lastly, in “The Last Night of the World”, a married couple awaken to the knowledge that the world is going to end that very evening. Nonetheless, they go through their normal routines, knowing and accepting the fact that there is no tomorrow. They way they spend their last night together strips the ideas of death and ending of its fear factor. The married pair meets its fate with grace and bravery, two traits that are admirable considering the situation. Another story that shows the true strength of humanity.