Here are 10 quotes from literature that show the true strength in vulnerability.

1. “You can’t admit to someone else what you’re too damn afraid to admit to yourself.”
― Beth Lewis, The Wolf Road

2. “There weren’t many people in this world who would let you be vulnerable and still believe you were strong.”
― Rob Thomas, The Thousand-Dollar Tan Line 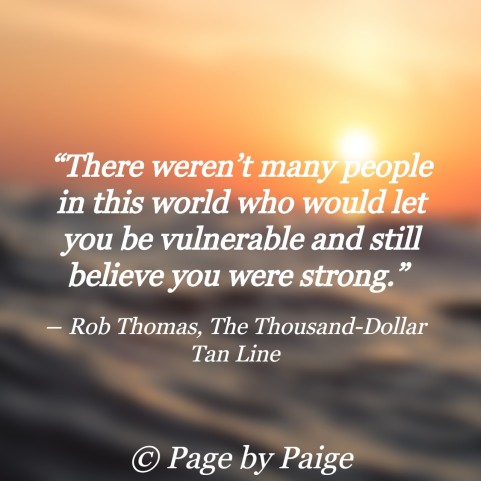 4. “You only really fall apart in front of the people you know can piece you back together.”
― Sarah Dessen, Saint Anything

6. “Others can make us vulnerable and the sooner such vulnerabilities are dealt with the better.”
― Ron Rash, Serena

7. “The strongest love is the love that can demonstrate its fragility.”
― Paulo Coelho, Eleven Minutes

8. “I had seen a different side of her, the one where she didn’t feel threatened by me, and I liked that side. That side was vulnerable and happy and kind.”
― Kasie West, Split Second

9. “He was demanding. He always would be. But sometimes, he was so vulnerable and she realized she had power in the relationship as well. She hadn’t expected that. He was as vulnerable to her as she was to him. He just acted arrogant and bossy, but deep down, where it counted, he didn’t want to lose her either.”
― Christine Feehan, Safe Harbor

10. “What happens when people open their hearts?”
“They get better.”
― Haruki Murakami, Norwegian Wood