Divergent isn’t just your average book, another in a long line of dystopian novels – it really is something else. A powerful and strong first book in the compelling series by Veronica Roth, where people have been split into five factions according to their personal qualities in future dystopian Chicago.

Roth, who wrote this story as a college student, has earned a tremendous amount of first book buzz, and rightfully so – this hype is well deserved. She uses factors and devices that fans of dystopian books will all recognise: a misfit protagonist, a compartmentalised society, dangerous secrets, and a cliffhanger ending. But even so, Roth still manages to create an unstoppable plot that remains remarkably original. Tris is both a self-possessed and refreshingly smart 16-year-old protagonist who most people can relate to, and readers will fall in love with her leading man right along with her.

Although the romance in the story is as swoon-worthy and fluttery as you’d expect from a teen novel, it actually comes secondary to the books themes of identity and controlling societies as well as it’s deeper meaning of fear and bravery, which is something I have come to admire. It is an impressive and provoking start to a fascinating series.

Beatrice Prior is on the brink of a decision that will change her life. In a society divided into factions all are forced to choose where they belong. And the choice Tris makes shocks everyone, including herself.

Once decisions are made, the new members are forced to undergo extreme initiation tests with devastating consequences. As their experience transforms them, Tris must determine who her friends are – and if the man who both threatens and protects her is really on her side.

Because Tris has a deadly secret. And as growing conflict threatens to unravel their seemingly perfect society, this secret might save those Tris loves… or it might destroy her.

The film adaption of Divergent gone on to become a worldwide sensation, featuring The Fault in Our Stars stars Shailene Woodley and Ansel Elgort as brother and sister Tris and Caleb, Theo James as leading man Four and Lenny Kravitz‘s daughter and X-Men star, Zoë, as Christina. 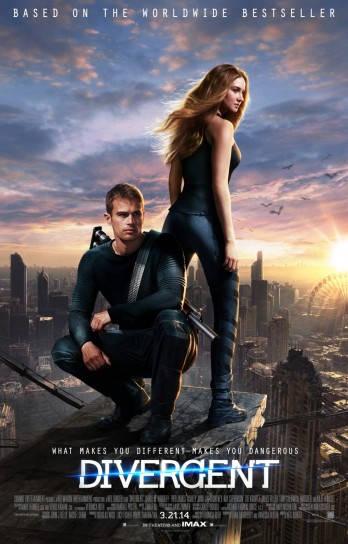 The five main factions in Divergent each symbolise a main personality trait that is supposed to eradicate the qualities in us that cause war in order to keep peace. Amity was formed by those why blamed aggression; Erudite was formed to rid of ignorance; Candor were those who though duplicity was to blame; those who strive to be less selfish were the Abnegation; and those who blamed cowardice formed the Dauntless.

Although this book is compelling in its own right, what drew me to it was the deeper meaning that I believed Roth was setting us up to see: the truth behind fear and what it really means to be brave.

Courage may be what the Dauntless are known, but in reality, they’re more focused on fear. Throughout Divergent, we see the characters questioning the nature of bravery and fear: Is true courage fighting someone or stepping up to protect someone? Is fear something you can leave behind or something you have to overcome every time?

Eventually Tris comes to realize that bravery isn’t about getting tattoos—it’s about standing up for what she believes in: it’s the “ordinary acts of bravery”.

What Roth makes us do is question everything we think we know about fear. She uses the whole story to really look into the depth of fear and explore it. Firstly, she shows us how we each deal with fear, and how it’s not always the same for everyone.

There’s a point in the story where Tris discovers one of Four’s fears and asks him how he deals with it:

“You’re afraid of heights,” I say. “How do you survive in the Dauntless compound?”
“I ignore my fear,” he says. “When I make decisions, I pretend it doesn’t exist.”
I stare at him for a second. I can’t help it. To me there’s a difference between not being afraid and acting in spite of fear, as he does.
— Veronica Roth, Divergent

One way to deal with fear, as Tori tells us, is to get through it until one day you are’t afraid anymore. What Four does here is offer us another way to deal with it, which is to act like it doesn’t bother you: not to become fearless, but just fear-resistant. Later, when Four lays out his theory about fear and acting brave, it is very much like what he said about his fear of heights: you act in spite of fear. He said:

“Becoming fearless isn’t the point. That’s impossible. It’s learning how to control your fear, and how to be free from it, that’s the point.”
I nod. I used to think the Dauntless were fearless. That is how they seemed, anyway. But maybe what I saw as fearless was actually fear under control.
— Veronica Roth, Divergent

Not only this, but when he tells Tris that sometimes he wants to “push her until she breaks”, he is showing her that fear can make her better, more alive in some ways.

Another thing that Roth explores is the different kinds of fear that exist in us. We talk about fear as if it’s always the same, but Divergent makes a good case that there are different types of fear: there’s dread, panic, terror. But other times it is completely different, like a nervous panic rather than blind terror. Like when Tris realised her fear was being with Four.

“My fear is being with him. I have been wary of affection all my life, but I didn’t know how deep that wariness went.”
— Veronica Roth, Divergent

In this, part of Tris’s fear is wrapped up with something that she wants but doesn’t quite trust. Tris doesn’t have the same fear when it comes to jumping off buildings, for instance.

Lastly, one of the best things that Roth reminds us about fear is the fact that, at times, it is necessary. To be devoid of fear is not actually a good thing for us as human beings, and a little fear is healthy.

“The chasm reminds us that there is a fine line between bravery and idiocy!” Four shouts. “A daredevil jump off this ledge will end your life. It has happened before and it will happen again. You’ve been warned.”
— Veronica Roth, Divergent

You might think that the Dauntless are totally fearless, but that’s not necessarily a good thing. Fear can be useful. If you think it’s a good idea to walk into a lion’s cage, your fear might tell you to get a sandwich instead. As Four notes, the Dauntless jump on trains, but it’s not brave to jump to your death.

Roth uses her whole story of Divergent to show us the spectrum of what it means to be brave and what fear really is. It is a powerful story that teaches us how to derive strength from the best in ourselves and how to deal with the worst. Roth reminds us that it’s okay to question our lives and beliefs, as long as along the way we remember what’s important. Finding the answers isn’t half as important as the questions we are asking.

But most of all, no matter how afraid we are, there are always ways to act in spite of our fear, even if we aren’t completely fearless.