With the next month comes new book releases, with novels from all kinds of genres and varying on length and audiences. Here are ten of this months new and most anticipated releases.

This debut novel from Dave Barrett will be released on August 2nd.

When Allison’s best friend, TJ, convinces her to come along for an epic game of LARP (live-action role-playing), she reluctantly agrees despite her reservations about the geeky pastime. TJ’s weekends are filled with powerful wizardry, mystical creatures, and intense battles with his LARP group. Each adventure is full of surprises, but the goal is always the same: to defeat the monsters and find the treasure.

Not long after their quest begins, the friends discover that something has gone wrong. The fantasy world they’ve built has transformed, and the battle they’re in the midst of is no longer make-believe.

Now they must fight for survival against brigands, kobolds, and other deadly mythical creatures that come to life. Fortunately, the group’s once-fictional magical powers have also become real – including Allison’s newly acquired gifts as a healer. They’ll need everything in their arsenal if they hope to make it home alive.

2. A Little Knowledge by Emma Newman

A Little Knowledge is the long-awaited return to Emma Newman’s popular Split Worlds series, being released on August 2nd.

Emma Newman’s popular Split Worlds series is one in which dynastic families feud across the ages, furthering the agendas of their supernatural patrons. Innocents are protected by monsters and the beautiful ones are not what they seem. The Split Worlds is an urban fantasy setting with a dash of noir, fantastical magic, evil faeries, and people just trying to drink their tea in peace.

3. It Ends with Us by Colleen Hoover

Sometimes it is the one who loves you who hurts you the most.

Lily hasn’t always had it easy, but that’s never stopped her from working hard for the life she wants. She’s come a long way from the small town in Maine where she grew up—she graduated from college, moved to Boston, and started her own business. So when she feels a spark with a gorgeous neurosurgeon named Ryle Kincaid, everything in Lily’s life suddenly seems almost too good to be true.

Ryle is assertive, stubborn, maybe even a little arrogant. He’s also sensitive, brilliant, and has a total soft spot for Lily. And the way he looks in scrubs certainly doesn’t hurt. Lily can’t get him out of her head. But Ryle’s complete aversion to relationships is disturbing. Even as Lily finds herself becoming the exception to his “no dating” rule, she can’t help but wonder what made him that way in the first place.

As questions about her new relationship overwhelm her, so do thoughts of Atlas Corrigan—her first love and a link to the past she left behind. He was her kindred spirit, her protector. When Atlas suddenly reappears, everything Lily has built with Ryle is threatened.

With this bold and deeply personal novel, Colleen Hoover delivers a heart-wrenching story that breaks exciting new ground for her as a writer. Combining a captivating romance with a cast of all-too-human characters, It Ends With Us is an unforgettable tale of love that comes at the ultimate price.

4.  The Beauty of Darkness by Mary E. Pearson

The Beauty of Darkness will be the third novel in Mary E. Pearson’s The Remnant Chronicles, and is due to be released on August 2nd.

Lia and Rafe have escaped Venda and the path before them is winding and dangerous – what will happen now? This third and final book in The Remnant Chronicles is not to be missed.

5.  The Secret Sea by Barry Lyga

This Young Adult, Science Fiction novel will be released on August 23rd.

Three friends find themselves plunged into a world of quantum physics, a rare disease, and a mysterious fact about a real-life global catastrophe.

Twelve-year-old Zak Killian is hearing a voice. Could it be a guardian angel? A ghost? No, that’s crazy. But sometimes the voice is so real. . . . It warns him of danger.

One day Zak is standing on the subway platform when the tunnel starts to fill with water. He sees it before anyone else. The voice warns him to run. His friends Moira and Khalid believe this is more than a premonition, and soon all three find themselves in an alternate universe that is both familiar and seriously strange. As Zak unravels the mystery behind the voice, he faces decisions that may mean the end of their world at home–if they can even get home!

In his most propulsive and heartfelt book yet, acclaimed author Barry Lyga explores the depths of friendship, the bonds of family, and the nature of the universe itself. 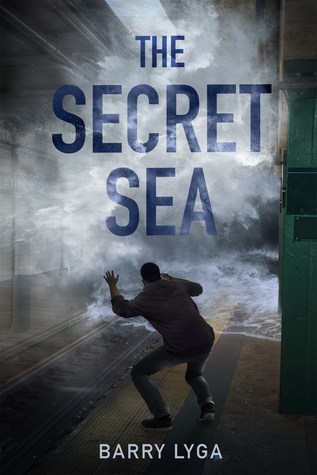 6. The Left-Handed Fate by Kate Milford

This historical fiction, fantasy novel is due to be released on August 23rd.

Lucy Bluecrowne and Maxwell Ault are on a mission: find the three pieces of a strange and arcane engine. They’re not exactlysure what this machine does, but they have it on good authority that it will stop the war that’s raging between their home country of England and Napoleon Bonaparte’s France. Despite being followed by mysterious men dressed all in black, they’re well on their way to finding everything they need when their ship, the famous Left-Handed Fate, is taken by the Americans.

And not just any Americans. The Fate (and with it, Lucy and Max) are put under the command of Oliver Dexter, who’s only just turned twelve.

But Lucy and Max aren’t the only ones trying to put the engine together, and if the pieces fall into the wrong hands, it could prove disastrous. Oliver is faced with a choice: help Lucy and Max and become a traitor to his country? Or follow orders and risk endangering that same country and many others at the same time–not to mention his friends?

7. The Wrong Side of Magic by Janette Rallison

This children’s book will be released on August 23rd.

The Phantom Tollbooth gets a modern-day spin in this magical middle grade fantasy filled with adventure and humor that will whisk readers away!

Hudson Brown stopped believing in magic long ago. That is, until the day he is whisked away to the magical land of Logos by a curious compass given to him by his off-beat neighbor, Charlotte.

Hudson discovers that Logos is a land ruled by words, thoughts, and memories. A fairy might ferry you across the river for the price of one memory. But be sure to look out for snarky unicorns, as they will see through those who are not pure of heart.

Not understanding the many rules of Logos, Hudson is quickly saddled with a troll curse. Charlotte, who, along with her father, was banished from Logos, can help get rid of the curse–but only if he agrees to find the lost Princess of Logos in return.

8. Tell Me Something Real by Calla Devlin

Calla Devlin’s Young Adult Contemporary novel is due to be released on August 3oth.

Three sisters struggle with the bonds that hold their family together as they face a darkness settling over their lives in this masterfully written debut novel.

There are three beautiful blond Babcock sisters: gorgeous and foul-mouthed Adrienne, observant and shy Vanessa, and the youngest and best-loved, Marie. Their mother is ill with leukemia and the girls spend a lot of time with her at a Mexican clinic across the border from their San Diego home so she can receive alternative treatments.

Vanessa is the middle child, a talented pianist who is trying to hold her family together despite the painful loss that they all know is inevitable. As she and her sisters navigate first loves and college dreams, they are completely unaware that an illness far more insidious than cancer poisons their home. Their world is about to shatter under the weight of an incomprehensible betrayal…

9. Been Here All Along by Sandy Hall

This Young Adult story is due to be released on August 30th.

Gideon always has a plan. His plans include running for class president, becoming head of the yearbook committee, and having his choice of colleges. They do NOT include falling head over heels for his best friend and next door neighbor, Kyle. It’s a distraction. It’s pointless, as Kyle is already dating the gorgeous and popular head cheerleader, Ruby. And Gideon doesn’t know what to do.

Kyle finally feels like he has a handle on life. He has a wonderful girlfriend, a best friend willing to debate the finer points of Lord of the Rings, and social acceptance as captain of the basketball team. Then, both Ruby and Gideon start acting really weird, just as his spot on the team is threatened, and Kyle can’t quite figure out what he did wrong…

10. A Torch Against the Night by Sabaa Tahir

A Torch Against the Night is the second novel in Sabaa Tahir’s An Ember in the Ashes series, due to be released on August 30th.

A Torch Against the Night takes readers into the heart of the Empire as Laia and Elias fight their way north to liberate Laia’s brother from the horrors of Kauf Prison. Hunted by Empire soldiers, manipulated by the Commandant, and haunted by their pasts, Laia and Elias must outfox their enemies and confront the treacherousness of their own hearts.

In the city of Serra, Helene Aquilla finds herself bound to the will of the Empire’s twisted new leader, Marcus. When her loyalty is questioned, Helene finds herself taking on a mission to prove herself—a mission that might destroy her, instead.