Have you ever wondered what it would be like to just say yes to something? To something you really want, something you’ve never tried, or even just to some crazy idea? Young Adult author Lauren Gibaldi does exactly that in her novel The Night We Said Yes. She shows us that by just saying yes to the things we might otherwise be afraid to do or might not normally do, we can have the adventure of a lifetime. We might learn something new about ourselves, we might discover what makes us happy, we might even fall in love.

Gibaldi not only a YA author, but is also a public librarian and has been, among other things, a high school English teacher, a magazine editor, bookseller and even a circus aerialist. She has a BA in Literature and a Master’s in Library and Information studies. Gibaldi lives in Orlando, Florida with her husband and daughter. Her novels include The Night We Said Yes, Matt’s Story (The Night We Said Yes Novella) and her upcoming book Autofocus, due to be released this June.

In a recent and exclusive interview, Gibaldi talks about her writing and in particular, The Night We Said Yes. She also talks about what we can expect from Autofocus.

When talking about writing, Gibaldi told us that she can be inspired by anything, and when she does become inspired, she just takes it and goes with it. she also goes on to say that she enjoys writing stories and books for young people. She said:

“Inspiration just hits and I go with it. It’s not always good inspiration, and I’ll know shortly after, but whenever I get an idea, I jot it down and see if I can do something with it. And I started writing for fun, and then decided I wanted to work toward being published. To my delight, it worked out! I really enjoy telling stories, and writing stories for teens.”

When we flipped the scenario and asked her what writers inspire her, she told us that there are loads of writers that do, but named some of her favourite YA authors. She said:

“So many! My ones in the YA word include Sarah Dessen and Stephanie Perkins.”

We also asked Adler some questions about how she plans her writing. Does she work with an outline, plan or agenda? Or does she just write and see what comes out? She told us:

“I just write! I’m not good at outlining, so I write until I lose inspiration. And when I do, then I try to create a bit of a plot forward to see where I want the book to go. I usually know where a story will start, and where it will end, and I just fill in the middle. (This makes it sound easy–it’s not. It takes me several months!)”

The Night We Said Yes is a strong and powerful story that reminds us that some people deserve second chances. Melissa Walker, the author of Ashes to Ashes and Lovestruck Summer, described the novel as “a story for anyone who’s ever wanted to give first love a second chance.”

Author of The Downside of Being Charlie, Jenny Torres Sanchez has said that “The Night We Said Yes captures the flutter and heartache of first love. This book is a first kiss and a first touch. It is a promise of a night filled with the thrill (and fear) of so many possibilities.”

Gibaldi crafts a charming, romantic story of first loves, lifelong friendships, uncovered secrets, and, ultimately, finding out how to be brave.

Before Matt, Ella had a plan. Get over a no-good ex-boyfriend. Graduate from high school without any more distractions. Move away from Orlando, Florida, where she’s lived her entire life. But Matt—the cute, shy, bespectacled bass player who just moved to town—was never part of that plan.

And neither was attending a party that was crashed by the cops just minutes after they arrived. Or spending an entire night saying “yes” to every crazy, fun thing they could think of.

Then Matt abruptly left town, and he broke not only Ella’s heart but those of their best friends, too. So when he shows up a year later with a plan of his own—to relive the night that brought them together—Ella isn’t sure whether Matt’s worth a second chance. Or if re-creating the past can help them create a different future.

When asked about how she came up with the idea for The Night We Said Yes, Gibaldi said she wanted to tell a story with friends finishing high school and the idea developed from there. She said:

“I love stories that take place in one night. I wanted to write about a group of friends nearing graduation, and seeing where a night may take them. When I started writing it, I realized that I didn’t want the story to end with just one night, and instead I wanted to see how much that night changed them. So that’s how I ended up adding the second night, and going back and forth.”

When reading the novel, I found that there were so many powerful, deeper meanings and messages hidden through it’s pages, including those about being brave and just allowing yourself to say “yes” to things in life. Gibaldi only confirmed this, saying that this is a message she hopes readers will walk away with after reading her novel. She said:

“When I sign books for readers, I usually write ‘What will you say yes to?’ I think, basically, I want readers to say ‘yes’ to something they really want, even if it might scare them.”

She also talks about her new novel, Autofocus which is due to be released on this year on June 14th. It’s described as a “beautiful and timely coming-of-age story that poses the question: Is who we are determined at birth, or can we change as we grow?”

Family. It’s always been a loaded word for Maude. And when she is given a senior photography assignment—to create a portfolio that shows the meaning of family—she doesn’t quite know where to begin. But she knows one thing: without the story of her birth mother, who died when Maude was born, her project will be incomplete.

So Maude decides to visit her best friend, Treena, at college in Tallahassee, Florida, where Maude’s birth mother once lived. But when Maude arrives, she quickly discovers that Treena has changed. With a new boyfriend and a packed social calendar, Treena doesn’t seem to have time for Maude—or helping Maude in her search.

Enter Bennett, a cute guy who lives in Treena’s dorm. He understands Maude’s need to find her mother. And as Bennett helps Maude in her search, she starts to find that her mother’s past doesn’t have to define her own future. 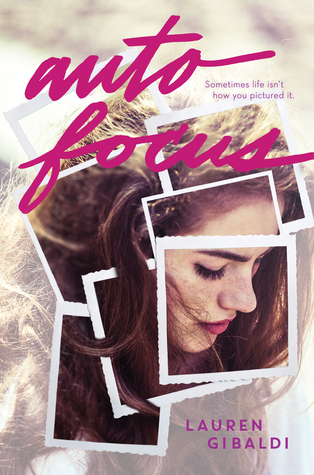 When we asked her what she can tell us about the upcoming novel, Gibaldi said:

“When assigned a school photography project where she has to focus on the theme of family, Maude decides to search for information on her deceased birth mother. She goes to Tallahassee, Florida, where she was born, and stays with her best friend Treena. But Treena is a bit different, and her search doesn’t go as planned. As she looks for more information on her unknown past, she starts to wonder if who we are is determined at birth, or if we can change as we grow.”

Gibaldi told us that the inspiration for this story came from wanting to write about a story that takes place in the beautiful Tallahassee, and from that the idea developed to tell a story about a character who was adopted looking for answers to her past. She said:

“Honestly, at first I wanted to write about Tallahassee! I thought about why someone would visit there, and what they might be looking for. And then Maude came to mind. I wanted to write a book about an adopted girl looking for a past that didn’t lead to her reuniting with her mother. I didn’t want that to be the end. I wanted the process to be the important part, and her growth with in it. In doing this, I spoke with several adopted people to find out if they went on similar searches, on what they would want to know, and what they’d be afraid of happening.”

She also offers up some advice for aspiring writers and those hoping to get into the writing industry. She tells her readers to never give up. She said:

“Don’t give up! Keep trying, keep going for it. Write hard and write fast. In the words of my last book, just say yes. :)”